Robert Pummill hails from the Texas Hill Country. His hometown, Kerrville, was once a jumping-off point for trail herds bound north for Dodge City, Kansas. Pummill literally lives a stone’s throw from the clear-running Guadalupe River, where thousands of steers long ago crossed in the company of wild, young cowboys who were headed into history.

The colorful cavalcade of longhorns, horses and heroes that once proudly passed by has become a recurrent theme in Pummill’s art. He also paints the wanderers who came West in wagons, Conestoga and Concord coaches, rolling upon an endless expanse of prairie grass that moved in the wind like ocean waves. Pummill’s art also includes Native American subjects in a talented tribute to the People who were at home and in harmony while the West was still theirs and the buffalo yet ran.

Pummill’s paintings are tales told of the soft, muted magic of open skies and spaciousness; of the lure of lonesome places; and of men meant to move on. Pummill paints it all with the accomplished technique of a seasoned fine artist, and with a wistful feeling for a West that once was.

“The artists I admire,” he says, “are Sargent, Remington, N.C. Wyeth, many of the Flemish masters, and some of the French Impressionists. I feel many of the world’s greatest artists are alive today, however, and many are painting Western subject matter. It would be difficult for me to pick a favorite.”

“I took my first art course at eleven,” he stresses, “and have been serious about it ever since. As with most artists, the interest has always been there.” Raised in Ohio, Pummill joined the Air Force at eighteen and served nine years, specializing in electronics. His art education was correspondence courses with Famous Artists School and Art Instruction. After employment in Mississippi and Florida, he went to night school at the Art Center School of Design in Los Angeles, California while working as an industrial artist, and then moved to Texas in 1968 as an illustrator for Vought Aeronautics.

In 1977 he became a full time painter at 41. “From these experiences,” he points out, “I acquired discipline and the ability to meet a specific goal, both time-wise and subject-wise. In Western art, just as in commercial art, you have to know what you want to end up with before you begin. The most important aspect of doing a painting is the ability to analyze what is necessary to re-create a mood or feeling.” Featured in magazines such as “Art of the West,” “Southwest Art” and “Western Art Collector,” Pummill’s work can also be found in a book on his art, entitled “Under Western Skies.”

Recently Pummill began a transition to more pure landscapes. Portraying the essence of the Texas Hill Country, the works struck a cord with viewers and soon the demand for his landscapes matched the demand for the beloved Heritage scenes for which he is known. This new found freedom has reignited a passion in the artist that is visibly evident in the sensitive quality of his work. Pummill’s landscapes can now be found in many of the most prestigious collections in the state of Texas and beyond. 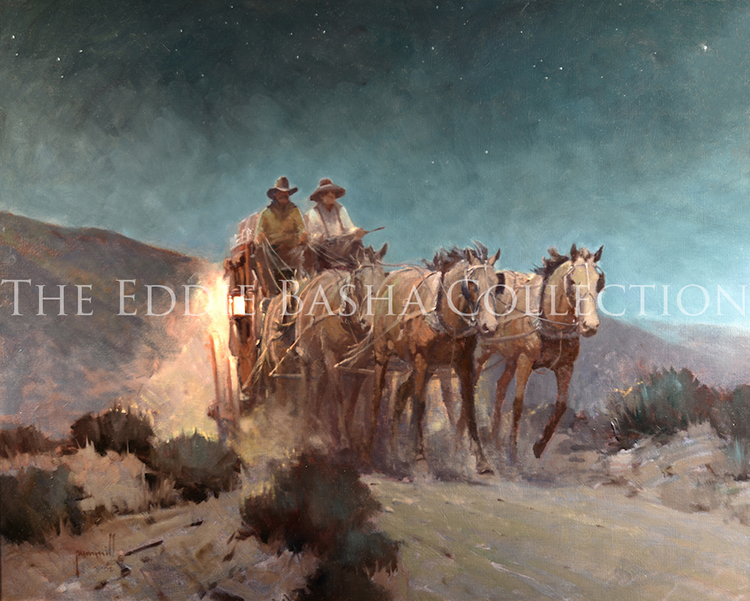